What is Krav Maga?

Krav Maga (pronounced "Krahv Magah" meaning "Contact Combat" in Hebrew) is the official self-defense and fighting system of the Israeli Defense Forces, Israeli Anti-terrorist Units, and various branches of the Israeli Security Forces. Krav Maga has been adopted by and taught to many federal, state, and local law enforcement agencies, including the F.B.I., U.S. Marshal Service, D.E.A., U.S. Secret Service, and many international law enforcement agencies worldwide. Now the world's most effective fighting system is being offered to civilians.

Plus, because it's based on a person's natural reactions, it is easy to learn. You can become proficient in months rather than years. Just as important, we teach people to function during the stress and shock of a sudden, violent encounter.

No defensive tactics program in the world is more battle tested than Krav Maga. Tested on the battlefield and in the streets, Krav Maga's practical approach to self defense will make you and your family safer and more secure.

People of all ages and levels of physical fitness can start Krav Maga classes and work their way up quickly. Students not only walk away in better shape and knowing effective self defense techniques, they learn how to prepare themselves mentally to tap into their own aggressiveness in any situation.

Krav Maga is not a traditional martial art, it is a modern method of reality-based self-defense….. Krav Maga is combat for a modern world.

Krav Maga was developed by the Israeli military for hand-to-hand combat on the battlefield. Imi Lichtenfeld (Chief Instructor for Physical Fitness at the IDF School of Combat Fitness—the founder of Krav Maga) was chosen to develop the system. To achieve his goal, Imi studied the fighting systems developed by cultures all over the world. He selected the best of their ideas, and culled out the techniques that were showy or required exceptional skill or physical prowess. He took the best of what was left, and refined them into a fighting system. His search was driven by answering these questions:

The end result became Krav Maga--a Reality- Based Self-Defense system that is all about employing the quickest and most effective counter-response when attacked.

Krav Maga was developed in a hostile environment in which the combatants could not devote many hours to hand to hand combat training. Therefore, the Krav Maga system was created to bring students to a high level of proficiency in a relatively short period of time. There are no forms (katas) or rules or set combinations as reactions to attacks. Instead, Krav Maga training focuses on teaching simple self-defense techniques which are specifically designed to meet real world attack situations.

Krav Maga is a survival system dealing with personal safety issues. It is considered to be a modern, highly refined, street fighting system, designed to be effective against armed and unarmed attackers. Krav Maga addresses a wide variety of aggressive attacks that include punches, kicks, chokes, bear hugs, headlocks, grabs, as well as defenses against multiple attackers and assailants armed with a firearm, edged weapon, or blunt object.

Krav Maga training stresses the ability to react when surprised. Techniques and training methods emphasize the ability to function from a poor state of readiness, and to move from a passive to aggressive state immediately in order to fight back and survive. Training methods teach students to react effectively under stress and to move efficiently from a position of disadvantage to a position of advantage.

In addition to self-defense, Krav Maga teaches hand-to-hand combat. This is a more advanced and sophisticated phase, and shows how to neutralize an opponent quickly and effectively. It embodies elements related to the actual performance of the fight including tactics, feints, powerful combinations of different attacks, the psychological dimensions of the fight, and learning how to use the environment to your advantage.

Krav Maga includes specialized training methods to not only challenge students physically, but to also instill a special mental discipline meant to strengthen the spirit and to develop the ability to deal with violent confrontations under intense stress.

Krav Maga incorporates fitness, self-defense and fighting like no other system. Krav Maga's top-rated Fitness classes compliment training by toning muscle and dramatically improving strength and stamina. Krav Maga's self-defense classes are a total-body workout that combines kicking, punching, street fighting, ground fighting, and defenses against weapons, getting students into prime physical shape. The total-body workout benefits of the Krav Maga self-defense and fitness system have been featured in publications such as Shape, Men's Fitness, USA Today, US, and SELF, as well as television from CNN and Extra to The Today Show. 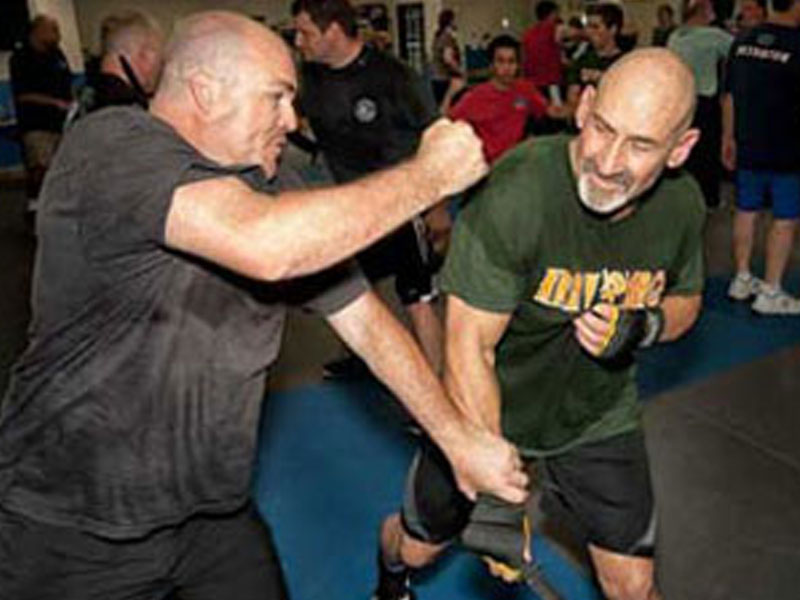 KMOC is awesome! I started training with them in 2009 with no prior martial arts/fighting experience. From the first class I was learning practical self defense techniques and being challenged physically and mentally. The instructors are uniformly excellent, with enough different styles and backgrounds to keep classes interesting. I was most surprised by the level of respect and restraint shown by both instructors and students. You will not find bullies or bullsh*t at KMOC. You will find some extraordinary people, get fit, and learn effective self defense.

WOW is all I can say! Such a great place! Everyone is so nice and there are a lot class times available and things to do. It is a tough workout and watch out - cuz you're gonna learn some kick-butt moves! When I signed up, I felt the price was reasonable, and the classes are just the right size. I'm a middle-aged, overweight female and I feel welcomed and respected. This is good for everybody!

I highly recommend Krav Maga of Orange County! If you're looking for dedicated instructors and a comfortable family atmosphere, look no further. Krav Maga is a reactive, no rules self-defense system that is quick to understand and easy to learn. The instructors are extremely professional and thorough. Furthermore, Krav Maga of Orange County offers group and other self-defense opportunities, as well as numerous, well known, guest instructors. You don't need an expensive gym membership or P90X, do this and you will be in the best shape of your life and learn invaluable self-defense skills.